Do you need a blockchain for that?

We’ve heard all about the amazing ways blockchain is going to revolutionise lives and industries – by making supply chain more reliable, banking transactions faster, commodities trading cheaper, and politics more transparent and efficient. There were even questions about why South Africa isn’t using blockchain to safeguard our votes after the recent alleged double-voting controversy during our 2019 general elections. So, if blockchain seemingly has the ability to change everything for the better, why is everyone not using it?

The short answer – because most systems don’t actually need blockchain, and people often just use it for the sake of it. There is a widely ridiculed use case of an American salad-serving restaurant chain said to use blockchain in their food supply tracking, even announcing that they were “the first to use blockchain as an application for food.” If you’re wondering why they were criticised for using blockchain in their supply chain, it’s because there were multiple easier, cheaper, more effective alternatives. This is a prime use case of using blockchain for the sake of it and not leveraging what the distributed ledger actually offers.

Taking a step back to the blockchain-in-voting topic, it’s important to note that blockchain is not immune to security threats. Even though South Africa definitely does need a more secure alternative to our current paper-ballot voting method, blockchain isn’t it. West Virginia announced that they would be the first US state to experiment with blockchain during their midterm elections, allowing people serving in the military to vote via a smartphone app. But experts in both cybersecurity and voting see blockchains as needlessly complicated, and no more secure than other online ballots.

Blockchain would work for recording votes, but would need additional layers of technology for more complex challenges such as voter validation, ballot anonymity, and letting voters verify whether their votes were recorded.

There are many organisations looking to use blockchain technology to build products which don’t need blockchain, gain nothing from it, and in some cases are worse off because of it. To help you, we’re sharing some of our experiences.

The below flowchart has a list of questions you need to ask before using blockchain to ensure your product needs and benefits from the technology: 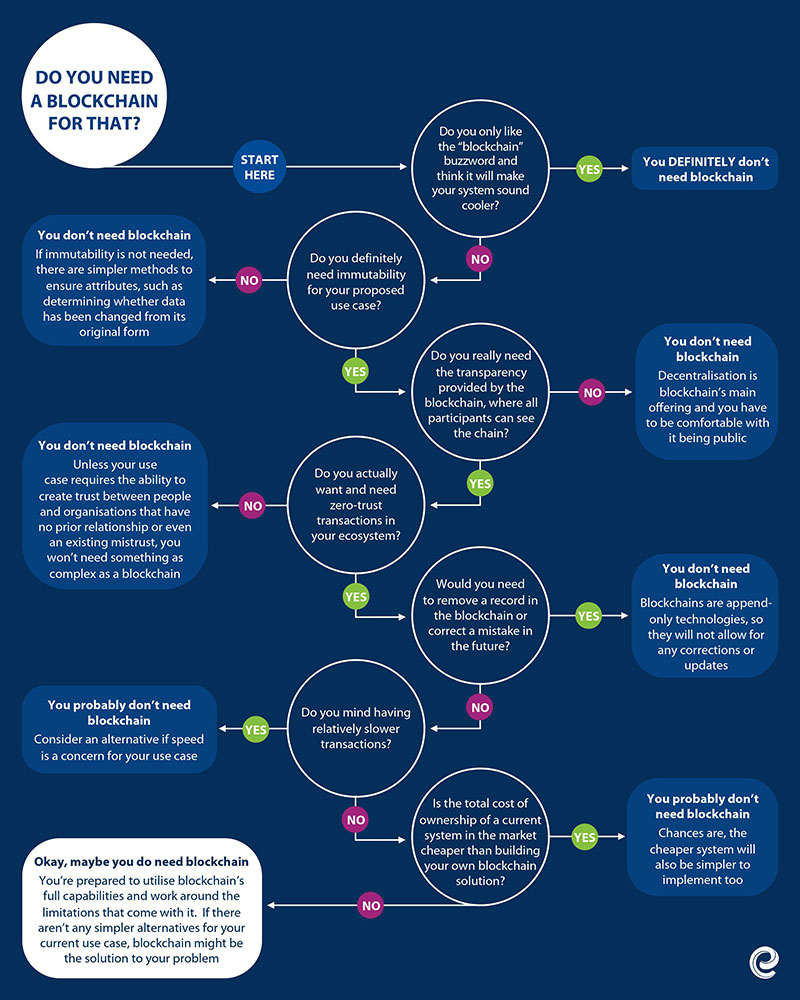 Looking at this, the salad restaurant chain wouldn’t have made it past the first question, and secure voting has major problems at the last three, as well as a technical weakness just getting votes into the blockchain to start with.

Blockchain is no silver bullet and more often than not, there is a simpler alternative. It’s easy to be wooed by the latest trending technologies promising industry disruption, but you need to think critically about how the technology would help you. A useful rule of thumb is to always determine which distinct advantages the new technology brings with it, along with the problems. Overlooking a potential technology mismatch in a rush to get a solution out is a sure way to end up over invested in a product which isn’t actually fit for purpose.

We use cookies on our website to give you the most relevant experience by remembering your preferences and repeat visits. By clicking “Accept”, you consent to the use of ALL the cookies.
Cookie settingsACCEPT
Manage consent

This website uses cookies to improve your experience while you navigate through the website. Out of these, the cookies that are categorized as necessary are stored on your browser as they are essential for the working of basic functionalities of the website. We also use third-party cookies that help us analyze and understand how you use this website. These cookies will be stored in your browser only with your consent. You also have the option to opt-out of these cookies. But opting out of some of these cookies may affect your browsing experience.
Necessary Always Enabled
Necessary cookies are absolutely essential for the website to function properly. This category only includes cookies that ensures basic functionalities and security features of the website. These cookies do not store any personal information.
Non-necessary
Any cookies that may not be particularly necessary for the website to function and is used specifically to collect user personal data via analytics, ads, other embedded contents are termed as non-necessary cookies. It is mandatory to procure user consent prior to running these cookies on your website.
SAVE & ACCEPT